The festive atmosphere of Spinata Grande slots will transport players into the heart of Mexico, which is where this online slot game from Net Entertainment is set. The game includes 5 reels and 40 paylines in a standard slot game layout that offers some unique features as well as a fun Mexican theme, and the name of the game is a combination of ‘piñata’, a common addition to Mexican festivals, and ‘spin’, which refers to slot games.

Spinata Grande is set against a dusty desert backdrop of a small Mexican town, complete with cacti and festival banners. The reels are framed by a carved wooden framework, and each reel is decorated with intricate patterns. On these reels are a variety of items one might expect to find at a Mexican fiesta, including a variety of colourful and humorous-looking piñatas, which are fully animated and spring to life when involved in a winning combination. To accompany this festive atmosphere is a cheerful Mariachi soundtrack to perpetuate the celebratory spirit of the game.

On the reels are a host of carnival-themed items, including 4 different piñatas. There is a red bull piñata, a purple donkey piñata, a green and yellow parrot piñata and a comical-looking blue fish piñata donning a sombrero and a handlebar moustache. Also featured on the reels are playing card symbols 10, J, Q, K and A.

Additionally, any of these symbols may appear as Colossal symbols on the reels. Colossal symbols will appear in blocks of 2×2 or 3×3 symbol positions, creating more winning combinations as they appear. 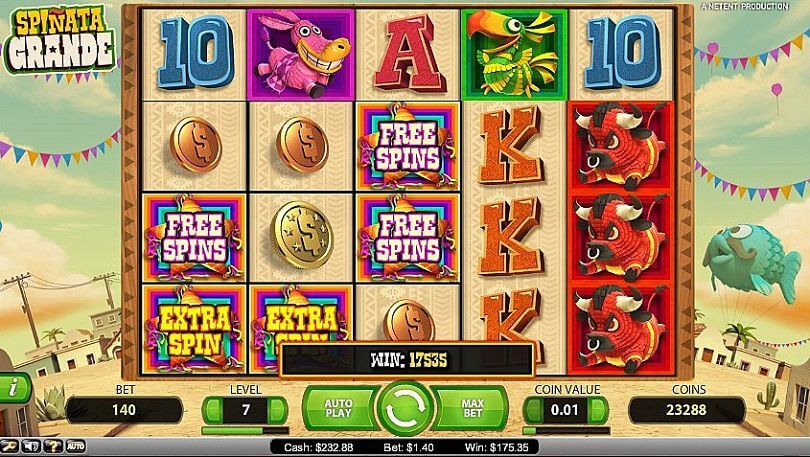 The Spinata Grande bonus symbol is the Mexican slot machine symbol. Landing one of these Colossal bonus symbols on the reels will activate the Mini Slot feature.

The game’s Mini Slot feature will be triggered when a Colossal bonus symbol appears anywhere on the reels. An area of either 3, 6 or 9 symbol positions will transform into a mini-slot game within the base game, depending on how many positions the Colossal symbol covered when it appeared on the reels.