Microgaming has developed and released a video slots game called What on Earth, which provides an inter-galactic-themed gaming experience complete with aliens, distant universes, and space shuttles.

The game offers a sound track and special sound effects that match the space theme, and offers a range of unusual symbols. These include a green asteroid, an orange planet, a burning cherry, a watermelon planet with mini watermelons orbiting around it, a rocket, and a spaceship control panel.

What on Earth features five reels and nine pay lines.

The What on Earth Wild Symbol

On its own, the wild logo symbol also offers a high payout, and if players land five What on Earth logos on any one of their active pay lines, they will be rewarded with a jackpot of 7 500 coins. 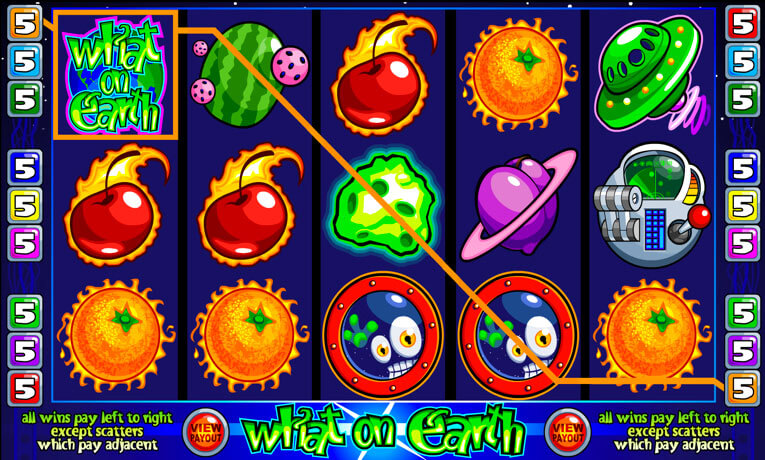 The What on Earth Scatter Symbols

What on Earth offers numerous scatter symbols at crazy luck casino, which are the Rocket, the Flying Saucer, and the Space Shuttle. The Rocket may appear on any one of the reels, but the Flying Saucer and the Space Shuttle can only appear on the third, fourth, and fifth reels. The scatter symbols may be used to activate the What on Earth bonus features.

If players land three Flying Saucer, three Space Shuttle, or three Rocket symbols on reels three, four, or five, then this will automatically trigger the Beam’em Up Bonus Feature. In this feature, players will be rewarded with a multiplier by choosing a specific alien that will beam humans up into its space shuttle. The multiplier will increase the amount of coins that have been bet.

The Destination Bonus Feature is triggered when the chosen alien beams up a globe instead of a human. Here the player may choose one of four different destination to continue beaming up humans.

The Contest Bonus Feature is triggered when the chosen alien beams up a contest invitation instead of a human. Here, the chosen alien will compete against other aliens to see how many humans they can beam up in a set amount of time. After the bonus game has ended, players will be rewarded with a certain number of coins, determined by how well their alien did in the contest.