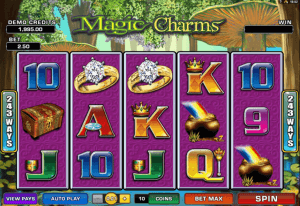 Magic Charms is an online Slots game developed by Microgaming and based on the fairy tale, The Frog Prince. The Frog Prince was the first story in the Brothers Grimm’s collection of fairy tales. As is typical of fairy tales the story has evolved from the original to the popular modern version. In this tale, a spoiled princess who has everything she has ever wished for except a prince.

One day while playing with a golden ball she drops it into a pond and the frog helps her find it but not before she promises to kiss him. After reluctantly kissing the frog it transforms into a prince, thus encouraging the idea of a lady having to kiss a lot of frogs before finding her prince. Magic Charms brings this fairy tale to life in the online slot game through the use of graphics, animations, music and of course the relevant symbols.

The game is set in a magical forest fairy land with giant mushrooms and the music adds to the idea that you are part of a fairy tale.

Gameplay and Symbols in Magic Charms

Magic Charms has 5 reels and 243 ways to win. Although there are no actual paylines, there are a number of different betting options available to the players. Wagers can be as low as 0.01 per spin or as high as 50.00 per spin. This shows that Magic Charms accommodates both high stake players as well as the lower stake players.

There are regular playing card symbols of 9, 10, Jack, Queen, King and Ace but there are also several symbols unique to Magic Charms. These include a red rose, a pot of gold at the end of rainbow and a diamond ring. In addition to these symbols there are also a number of special symbols which relate more directly to The Frog Prince fairytale. These are the Frog Prince symbol and the Princess symbol, the Treasure Chest symbol, the Key Symbol and the Magic Wand symbol.These special symbols all trigger either special bonus features or the bonus games. 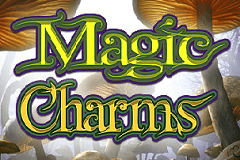 Magic Charms has a fair amount of bonus features. During the main game the Magic Wand acts a wild symbol and can only appear on the middle reel. If it lands during a spin then it will expand to take up the whole reel and will substitute for the non-magic fairy tale related symbols in order to form winning combinations.

The Magic Wand will also double the winnings of a combination it is part of. There is a Frog and Princess bonus round where both the Frog Prince and the Princess are the wild symbols; the Frog appearing on reel 2 and the Princess on reel 4. If both of these wild symbols appear together during a spin then the player is awarded 3 free spins. During these free spins both the Wilds expand to cover the entire reel in order to help form winning combinations.

Any winnings from this bonus round are then gambled so the best 10 nz online pokies player has a chance to win 4 times the rewards initially won. Treasure Chests appearing on either the first or fifth reel will activate another bonus feature. You will be given a choice of keys and you need to choose which key will open the Chest. If you are successful in opening the Chest a bonus amount will be won.