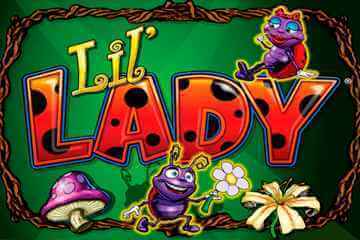 Lil Lady is an online slots game which is played on the five reel and four row set up. There are forty win lines set across the reels where an amount of one to five coins can be placed on each of the win lines. The coin value ranges from 0.01 to 5.00.

The Lil Lady Graphics and Theme

Lil Lady is an ITG powered online slots game with an animated insect theme. The backstory appears to be centred on a love affair between a lady bird and a love bug who are illustrated in a cartoon like manner. The graphics are reminiscent of popular animated movies like A Bug’s Life.

The reels are set on a background vista of a small country garden, which is home to the brightly coloured insects. The themed imagery upon the symbols include the lady bug, a bonus symbol, the Lil Lady herself, her suitor the love bug, a flower, and a wild mushroom. The lower valued symbols include the standard nine, ten, jack, queen, king and ace playing card icons.

The pay outs are determined by the number of symbols that form the winning combination. They must land on an enabled pay line and run from left to right. The lady bug will pay up to the maximum prize of 1,000 coins, 200 coins or 50 coins when appearing five, four or three times on the reels.

The Stacked Wilds and Scatter Symbols

The Lil Lady stacked wild is represented by the lady bug. The lady bug will stand in as a substitute for another standard symbol when a winning combination is possible. As a stacked wild the lady bug may multiply to cover all four positions on a reel when she lands on it but on the free spin bonus reels she will stack up to five times on one reel.

The scatter symbols are simply displayed with a bonus sign like bonuses are shown at most australianslotsonline.net sites. The bonus scatters will only appear on the second, third and fourth reels and will pay a 1x multiplier on the initial bet when appearing regardless of whether they have landed on an enabled pay line. If the bonus scatter appears simultaneously on the middle reels the Lil Lady free spins bonus round is triggered. Five free spins are initially awarded to players but if the bonus symbols continue to appear on the three middle rows, additional sets of five free spins will be awarded. The free spins bonus reels offer more frequent stacked wilds and bonus scatters but there is a limit of up to 255 free spins that can be awarded consecutively.