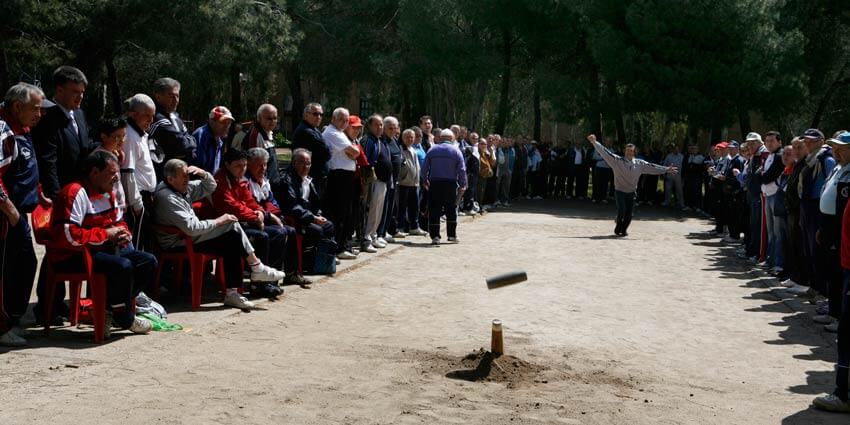 While one cannot state that Calva is a mainstream sport, it certainly is still very popular today with numerous clubs in formation.

The game of Calva can be traced back as far as 7th century BC, and was played during the time of the Iberians and the Celts. Historically it was devised as a way for shepherds to entertain themselves while out with their livestock, and involved throwing a rock with the aim of hitting a bull’s horn.

The name ‘Calva’ originates from the field on which it was played in ancient times, known as a ‘calvero’, which was a field free of obstacles like plants and rocks. While the game sounds simple enough, it becomes clear that it’s not as straight-forward as it sounds when you consider the mechanics of the game.

Even though Calva has been played for centuries, it became more regulated in the 1980s when the formation of the first teams began. Today the sport enjoys a busy calendar of competitions and tournaments.

As you can see, the game of Calva presents plenty of online betting and wagering opportunities. You could even place a wager on how far a player could throw their ‘marro’, down to the centimetre.

Calva is played on a flat, unobstructed terrain of approximately 25 metres long and 5 metres wide. The object of the game is to knock over a piece of wood, which is held up by one of its sides, with a metal cylinder. The player stands 14.5 metres away from the wood, and has 25 chances to knock the wood over, as well as 2 practise throws.

The wooden object, or calva, is customarily made of oak and has the shape of an obtuse angle, or wide ‘V’ shape, at approximately 120 degrees. There are very specific guidelines to the formation of the calva, with the lower segment being 23 centimetres, and the upper being 22cm long. These are known as the ‘zapata’ and ‘alzada’ respectively.

The ‘marro’ must also have a specific structure. It may not weigh more than 3 kilograms or be longer than 25 centimetres in length, and is generally a metal cylinder or oval with the owners name and particulars engraved on it.