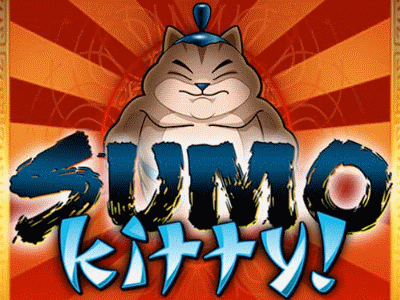 The Japanese art of Sumo wrestling has been in practice for many centuries. Sumo wrestling is considered to be Japan’s trademark martial art, and it has inspired many online casino games and slots like Sumo Kitty. Sumo Kitty is a Bally Technologies slot based on this traditional art, but the theme has been updated with a fun twist as well.

This slot is centred on a Sumo wrestling cat, and plays out over 5 reels, 4 rows, and no set payline structure. Instead, any matching symbols on the reels are counted as a win, as long as they appear from left to right. The casino bonuses features here include free spins, multipliers, and Bally’s Hot Zones wild feature.

The reels of Sumo Kitty only occupy a small space on the screen. Above these reels is the game’s backdrop, including a graphic of the Sumo Kitty waiting to begin the wrestling match. The graphics of the game have been designed in a painted Japanese style, and the symbols include traditional Japanese items like bonsai trees, Koi fish, and yin yang symbols.

The Sumo Kitty game play is accompanied by a themed Asian soundtrack, and matching sound effects play whenever players land a winning combination on the reels.

The reels of Bally’s Sumo Kitty slot contain both poker symbols and character symbols. The poker symbols award lower payouts throughout the game, and include 9, 10, J, Q, K and A in a colourful font.

The character symbols are archetypal Japanese symbols like lotus flowers, bonsais, Koi fish, yin yang balls of wool, and the Sumo Kitty himself. The cat symbol is worth 10.00 for 5 of a kind, making it the slot’s highest paying symbol. Second most valuable is the wool, bonsai, and Koi symbols, which award 6.00 each for 5 of them in the right position.

The Sumo logo is a scatter symbol in Sumo Kitty. This scatter will trigger the game’s free spins feature when players land just 3 or more on reels 1, 3 and 5 of the base game.

The wild in this game is a Wild logo, which substitutes all symbols except the scatter. Sumo Kitty also contains Bally’s Hot Zones wild feature. Irregular Hot Zones blocks will appear at random throughout the game, and all of the symbols in those blocks will be turned wild to create extra matching combinations.

Once players have triggered the Sumo Kitty free spins feature, they will be able to choose from 3 different options. The first option offers 5 free spins, and any wins containing a wild symbol will be multiplied by 10x, 12x or 20x.

Next is 10 free spins, and any wild-containing wins will be multiplied by 5x, 7x or 10x. Lastly is the 20 free spins option, along with 2x, 3x or 5x multipliers. The Hot Zones will also appear throughout the free spins feature to turn extra symbols wild.