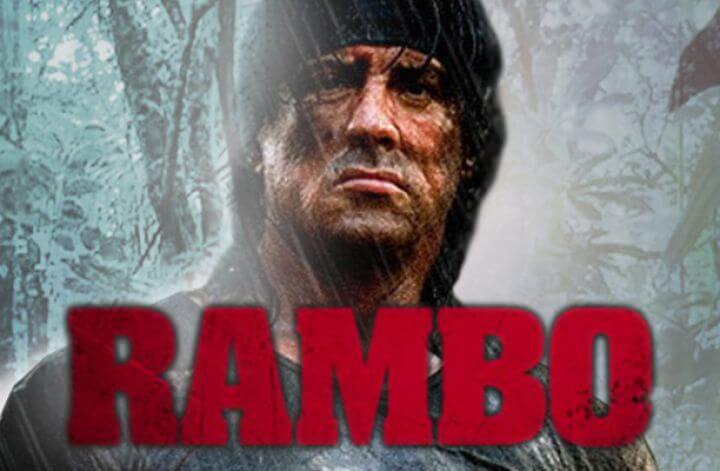 The first Rambo film appeared on screen in the 1980’s, where Sylvester Stallone plays John Rambo, a veteran war hero. The fourth instalment of this film is based around John Rambo who joins a group of mercenaries in Thailand, who go on a mission to rescue Christian – aid workers. This particular film in the series appeared on screens in 2008, which is the subject of this video slot game.

If you’ve watched any of the Rambo films, you would have seen Stallone embark on many one-man missions. The symbols on the reels reflect this. The symbols include hand grenades, knives, ammunition, armoured cars and John Rambo himself.

The special symbols of Rambo includes:

Wild – A red Rambo with an arrow

The Wild symbol can replace any regular icons, except for the progressive and scatter symbols.

The Scatter, when it appears anywhere in the reels, activates the free spins. 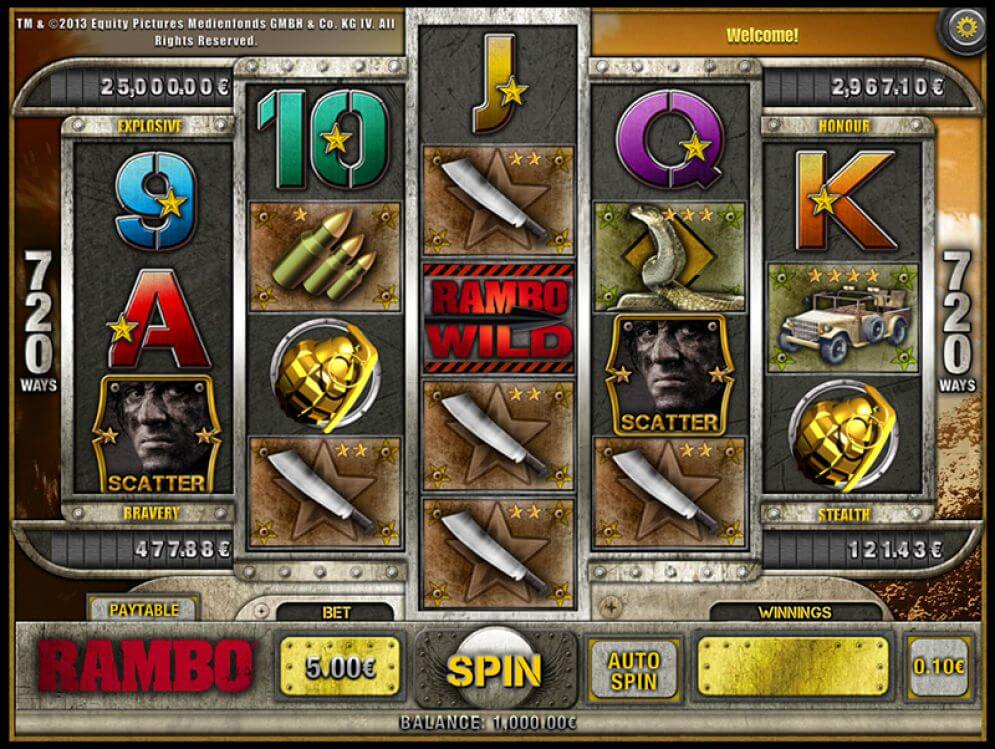 Rambo is a five reel, twenty-payline video slot game, developed by iSoftbet. The five reels for Rambo are quite different to any five reel slots game. The first and fifth reels have only 3 symbols. The second and fourth reels have four symbols. The third reel has five symbols.

Across the five reels, there are 720 ways to win. During gameplay, you would encounter the special symbol as mentioned previously. They are free spins, bonus rounds and progressive jackpots.

The free spins feature is triggered when three or more scatter John Rambo symbols appears anywhere on the reels. Five free spins are won if the player lands the minimum of three scatter symbols. Five extra are added per extra scatter landed. The player will also get a payout of five, 10 or 15 times their total bet based upon the number of scatters landed.

The progressive jackpot symbol, the gold grenade, is effectively a scatter. The player will need to land at least five of these symbols to enter jackpot territory.

There are four different jackpots to be won in Rambo, namely: Stealth, Bravery, Honour and Explosive.

The various jackpots have different sized payouts, with Explosive jackpot having the biggest payout.

The interface of Rambo is quite user friendly and convenient. This way the player can easily study the rules of the game and other particulars of the interface.

Main elements of the interface:

There is also the user’s settings window, which can be found on the screen, where the player may adjust the sound and the size of the screen.

The amounts of the progressive jackpots can be seen in the four corners of the Rambo video slot game.

To play Rambo, there is no need to download and install the game on your computer. The game can be launched directly in the players’ web browser and you can enjoy gambling online NZ instantly.