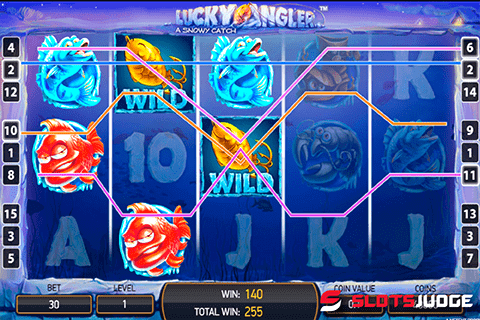 The fishing in this slots game takes place in the depth of an icy winter. Lucky Angler is played against the background of a frozen lake, with underwater scenes of fish swimming around behind the symbols. The animations in the game are eye catching. When a Sticky Wild symbol completes a winning bet line, the symbol becomes active and swims around as if the fish had been hooked and reeled in. The symbol then freezes over once more and turns into an ice cube, which sticks to the reels. Certainly Lucky Angler, or Snowy Catch as it is sometimes called, is not a game only for fishing enthusiasts, but for any player who looking for something slightly different.

In the main game the player will spin the reels in the sunshine, while in the Free Spins bonus game, the reels are spun in the moonlight.

Lucky Angler is a good slots game that is easy to operate, but it is definitely the presentation that will make a lasting impression on players. 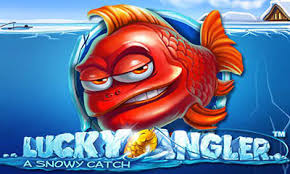 Lucky Angler is a 5 reel, 3 lines and 15 pay lines. On these 15 pay lines the player can win if symbols line up either left to right, or right to left, which means the number of pay lines is actually doubled. This is the special feature called Win Both Ways. There are also Sticky Wilds. These function like Wilds in most slots games, and can substitute for any other symbol except the scatter. Sticky Wilds appear on reels 2 and 4 in the normal game, and on reels 2, 3 and 4 in the Free Spins. If they form part of a winning line they stick to the reels until they no longer form part of a winning combination.  The Scatters are used to initiate the Free Spins, providing the player will see at least three of them. The more Scatters appear, the more Free Spins will be awarded. During the Free Spins, Sticky Wilds can also appear on reel 3, but otherwise function like they do in the main game.

Like choosing bet options at mobile sports betting sites, the player can click on the coin value button to increase or decrease the size of the bet placed. The Stake level button, if pressed, will change the value of the total bet placed. There is an Auto play button too, if the player desires to start each spin automatically.

The harsh Arctic conditions portrayed in the Lucky Angler, or Snowy Catch, slots game still offer the possibility of a large jackpot to be won. There are also fish, lobsters and crabs waiting to be caught, and various kinds of arctic animals, a golden lure and even an old boot, make up the symbols in this game. As the player casts a fishing line through the ice, the frosty environment is complemented by the sounds of water from underneath the layer of ice.