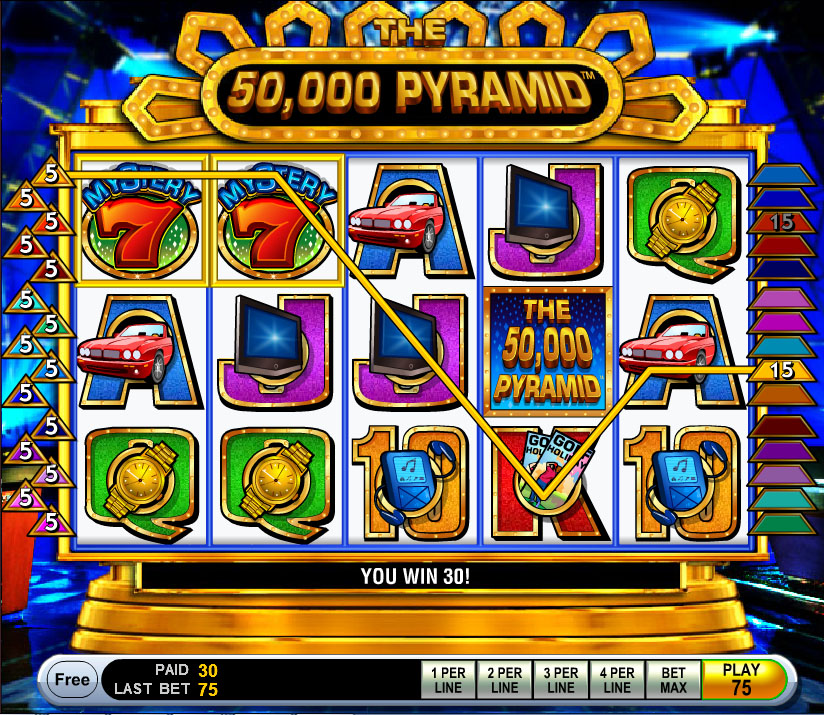 Players based outside the United States of America may well not have hear of the television show upon which 50, 000 Pyramids is based: it was a US-only production that had contestants attempting to identify what their teammates were talking about in an effort to win prizes. Although this IGT slots offering does not entirely accurately represent this TV show, there is a pyramid and the film studio theme can be inferred.

50, 000 Pyramids online slots has five reels and 15 paylines for players to make use of, and gameplay is set in a brightly-lit television studio. The symbols for the game are examples of the kinds of items players competing in this type of show would hope to win: an MP3 player; an over-sized television; a golden watch; a car, and so on. Other symbols include a celebrity star; symbols which represent contestants; golden bars; and an extra-large red seven.

The 50, 000 Pyramids game logo is the wild symbol, and this icon is also the key to the top jackpot payout. The scatter symbol is the icon depicting the winner’s circle.

50, 000 Pyramids has a bonus game available, called the Winner’s Circle, and IGT has added a little extra variety in this area for its players to enjoy. Players will be required to land three; four or five the scatter icons anywhere on the game’s reels during the base game in order to play the pyramid.

The idea for this 50, 000 Pyramids slots bonus game is that players select blocks from the bottom of the displayed pyramid and then proceed to work their way up. Each successful selection will grant the player either extra free spins, after the game starts off with two, or an additional multiplier. Players will aim to select blocks containing these or arrows directing them upwards, which will advance them to the subsequent level.

Players who are able to advance to the pyramid’s peak will be granted as many as 36 free spins, along with a multiplier of nine.

Should this part of the 50, 000 Pyramids online slots game be triggered with four or five of the scatter symbols the pyramid will contain more additional picks and the up arrows.  When a player has run out of picks the free spins will restart and the prize will be calculated.

In order to win the largest prize available for this online slots game players will need to have the maximum bet, as displayed below the game’s reels, active. The online betting range is between 0.05 and 25, however, so there is good scope for those who do not wish to play with the largest stake on offer, and more conservative bettors will be as easily able to enjoy this IGT offering as well. The return to player rate, or RTP% is 95.01, and the base-game jackpot total is able to award a whopping 50 000 multiplication of the bet the player has staked.